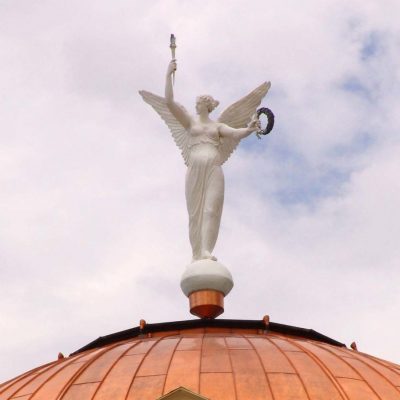 Before today’s Jericho March in Phoenix, as we waited for a prayer gathering to begin outside the Arizona capitol building, a man dressed in a suit (probably the best-dressed man in the large crowd) came to the microphone to encourage us to focus on God’s providence during this election crisis. Drawing our attention to the winged statue atop the capitol dome (which looks like an angel), he explained that the statue actually functions as a weather vane, turning one direction or another depending upon which way the wind is blowing. As he pointed out that in God’s providence, the wind was directing this “angel’s” face toward us, a man in the crowd screamed at him, repeatedly calling the statue an idol and saying that it should be torn down. The well-dressed man at the microphone, speaking in gentle tones, invited the heckler to come to the microphone to explain his concerns. Instead, the heckler just stayed where he was, continuing to scream about idolatry.

Read my insights about this